On Saturday, October 22, IAEM Latin America and Caribbean Council President Roberto Macchiavello paid an impromptu visit to the Academy and spent the morning with students and staff to discuss the importance of international disaster preparedness.

Macchiavello’s interest in disaster management evolved from his own personal experience when an 8.8 magnitude earthquake struck the coastline regions of Chile on February 27, 2010. At the time, he was serving in the Chilean Navy as a Rear Admiral. He witnessed firsthand the devastating effects the earthquake. In all, the earthquake impacted six Chilean regions (from Valparaiso in the north to Araucania in the south). The 8.8 magnitude earthquake ranks as the fifth largest earthquake ever to be recorded by a seismograph. It killed over 500 people and affected over 2 million people, leaving 500,000 houses inhabitable. The earthquake triggered a tsunami which devastated several coastal towns in south-central Chile and damaged the port of Talcahuano. The damaged reached $30 billion, including major destruction to 4,500 schools, 2 airports, 53 ports, and 56 hospitals. The biggest issue that faced the government was housing. Over 80,000 people needed immediate emergency housing and 106 emergency camps were constructed but without public services because the government did not want the temporary camps to become long-term villages. Macchiavello briefly touched upon a few issues that stood out about this event. First, government at all levels need to improve their emergency communications network; second, personal disaster preparedness needs to be instilled in the community; third, the country as a whole need to be better focused on disaster preparedness planning and the identification of organizational resources, roles and responsibilities.

After taking a few questions from students, Admiral Machiavello said he was impressed by FIU’s commitment to the international community and how the Academy’s curriculum focuses not only on domestic emergency preparedness and disaster management, but it’s engagement in humanitarian assistance higher education. As president to the IAEM Latin America and Caribbean Council, he believes that a graduate program like the Academy’s should be taught throughout the Latin America and Caribbean region. 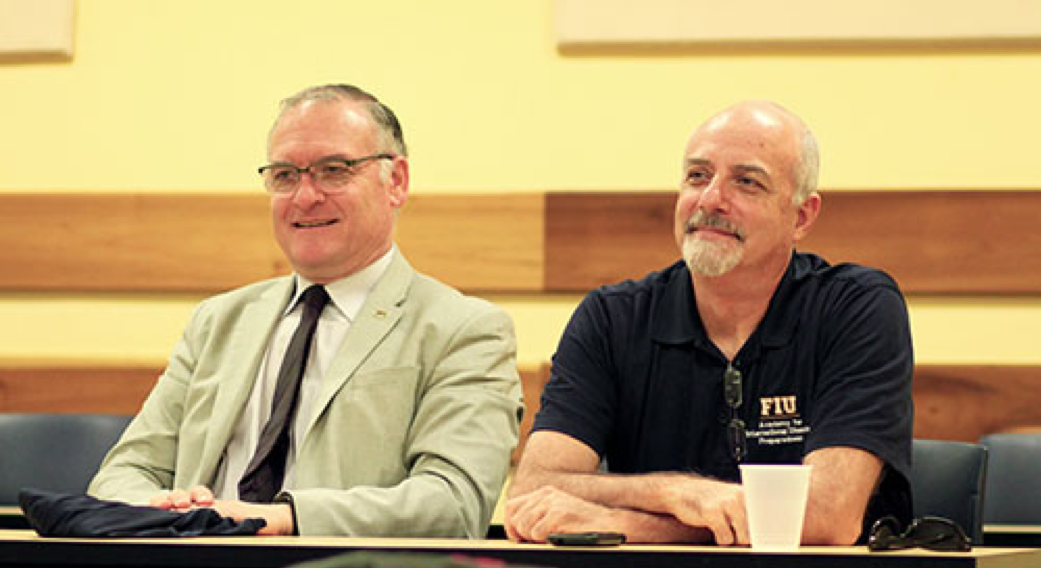